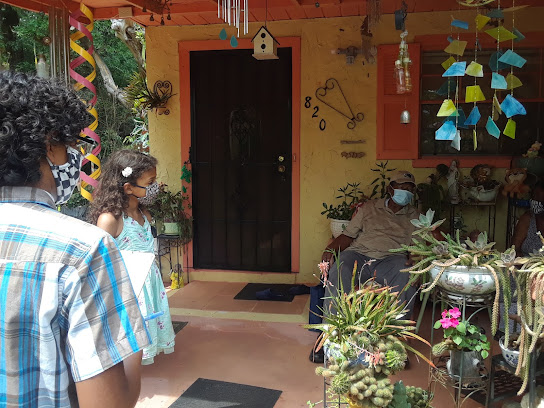 To learn more about the New Augustine Colored Elementary School #36, the school around which, we will be cleaning up for our Earth Day, Every Day event, my sister and I had the honor of interviewing two true West Augustine Nature Heroes, Ulysses and Sarah Williams, a local couple, who have been married for over 63 years, and who both went to to the school, which they call #6. 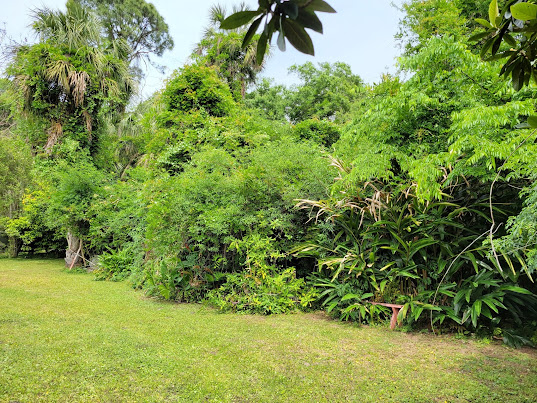 Mr. and Mrs. Williams are true West Augustine Nature Heroes, because they have dedicated their lives to surround their family with plants and nature. Around the Williamses' home, trees, plants, and flowers are creating a remarkable oasis. There are plants everywhere only interrupted by garden art, bird baths and garden benches.

The garden that surrounds their home features 10 feet tall shell gingers, wild elderberry bushes, cacti growing up in the trees, and even decades tall citrus trees planted when their children were young. There were so many plants everywhere that it created a mystical setting. Every corner of their magical garden provides evidence of their love for nature. They really are true stewards of this earth. 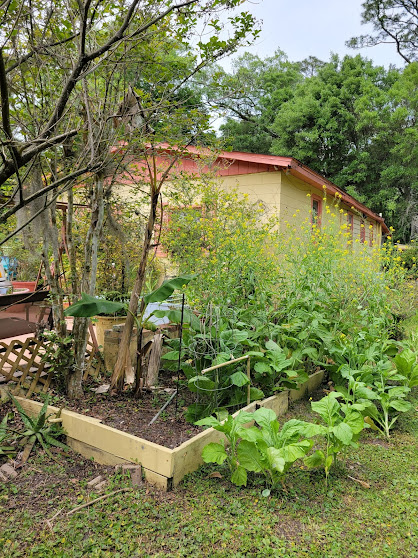 Banana trees and collard greens in the Williamses' garden.

Not only are Mr. and Mrs. Williams plant lovers, but they also strongly believe in recycling and reusing, and whenever they can, they try to incorporate nature into their landscaping design. An old cut-down tree serves as a play area for their grandchildren, and a bottle tree in the back of the garden features old glass bottles.

Mrs. Williams told us that she started at school #6 back in the forties, when she was five years old. She was in ninth grade, when R.J. Murray High School was built, and she graduated from there in 1957. "Murray used to be a high school," she said. "Excelsior went from first grade to twelfth grade, but then we got lucky, we got blessed when we got Murray. Murray started from ninth grade through twelfth."

When asked how the couple met, Mrs. Williams said, "I didn't pay him any attention. I didn't like him." They both laughed. "I couldn't stand him, and he couldn't stand me." 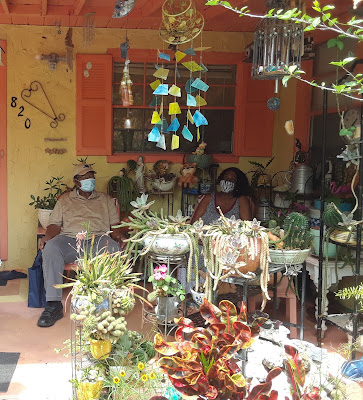 When asked about the old elementary school Mrs. Williams said, "Mr. Webster, he used to live right next to here...He was my neighbor and he was my principal over at the #6 school, and he had a house right over there."

"He was a good principal," the couple agreed, but they explained that Mr. Webster was very strict and he was quite a disciplinarian. "We were more respectful to the teachers and other people back then. We had pride in the school back then."

Mrs. Williams was on the basketball team and on the dance team. Her favorite part about going to school #6 was being on the dance team. "We had a group of kids, girls and boys, and we would travel all around. We would go to Florida Normal to dance on the stage, we'd go to Bunnell and Green Cove Springs and all over." She started reminiscing about her time on the dance team, about her coaches Mrs. Hill and Mrs. Bryant, and she began singing one of the songs, which she used to perform to.

"It was fun, but we didn't have everything that they have now at the schools."

The Williamses agreed that it is a good idea to turn the former elementary school into a museum so that people can learn about how it was like to go to school back in the day of segregation. "It was one of the first black schools," Mrs. Williams said. 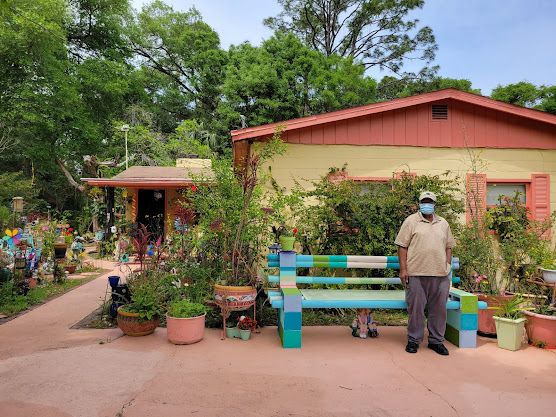 Mr. Williams with all his plants in his yard.
Interview by E.R, 6th grade, Murray Middle School and
I.R., 2nd grade, The Webster School